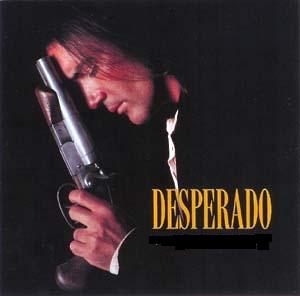 He came back to settle the score with someone. Anyone. EVERYONE.

Desperado (1995), a.k.a. Pistolero in Spanish, is an action thriller film starring Antonio Banderas. It is the second movie in Robert Rodriguez's Mexico or Mariachi Trilogy , following El Mariachi and followed by Once Upon a Time In Mexico. Has the interesting distinction of being one of very few sequels to be in an entirely different language from the first movie.

Our No Name Given Protagonist has lost his love and killed her killer. That's just not enough for him. So he's trying to find her killer's boss and kill him, too. Unfortunately for El Mariachi, he'll have to use every gun in his guitar case against Mooks in seedy bars, thugs after his life, a knife throwing assassin, to do it. And all of this while keeping Carolina (Salma Hayek), his new love interest, friend and informant, and random bystanders alive.

Not to be confused with Desperados.

Tropes used in Desperado include:

Mariachi: Bless me Father, for I have just killed quite a few men.
Buscemi: No shit!

Priest: Would you like to come to confession, my son?
Mariachi: Maybe later, father; because where I am going, I would just have to come right back.

Buscemi: One day, you're gonna lay down too hard on that thing and blow your brains out.

Buscemi: ...No, man. The bartender got it worse than anybody.