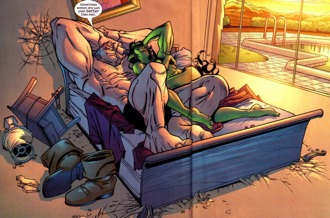 "Sometimes Women are Just Plain Better than Men," and sometimes beds get destroyed

Sex is always better when you're breaking something.

The relationship dynamic between Bob and Alice has always been stormy. Maybe they're in love but have been fighting lately over this or that. Maybe they're doing The Masochism Tango. Maybe they're enemies with chemistry and magnetism they're trying to resist. Maybe they're attracted to each other but seem capable only of Slap Slap Kiss.

One night—because it always happens at night—Bob and Alice get into a fight. But this is not just any fight; it's a knock-down, drag-out brawl where anything goes—literally. The location they've chosen for their battlefield breaks up around them as they display their rage physically. They may even actively be trying to kill each other.

Then at one point during the fight, their attraction—admitted or not—turns their rage into sexual passion. Amidst the broken timbers, falling plaster, rattling floors and shattered furniture, they can't get into each other's arms (and/or pants) quickly enough. They can barely keep their hands off each other long enough to clear a spot against a wall or on the floor to do the deed.

It makes an interesting precursor to the obligatory love scene and frequently leads to an Aw, Look -- They Really Do Love Each Other. More often than not, it's Head-Tiltingly Kinky.

Supernatural circumstances can and do contribute to the sex leading to destruction even if there's no actual rage or fighting involved.

Like Slap Slap Kiss, it's a safe bet to say that this rarely happens in real life; when it does, though, it's usually in dysfunctional relationships or cases of Domestic Abuse. In terms of Unfortunate Implications, Destructo-Nookie can be just one rung below Victim Falls For Rapist on the Squick ladder. (Fortunately, the couple engaging in Destructo-Nookie are both consenting to the act with each other. Or, they are both dominating/twisted enough that they attempt to rape each other simultaneously).

Angel: It was a tornado. A hurricane. A tsunami crashing down upon a tower of rock. Our juices fell like rain on the inferno.
Jesse: Hey!
Angel: We were not meant to even meet, let alone achieve such union. We were not created --
Jesse: Hey! How much more of this horseshit have I gotta listen to?

Buffy: "When did the building fall down?"

Buffy: We missed the bed again.
Spike: Lucky for the bed.

Shran: Andorian women are far more aggressive than Earth females. She made...an overture. I had a choice -- charge her with assaulting a superior...or mate with her.

Santos (to reporters): So, I'm going to address this once, just this once, and that'll be the end of it, okay: No way was that bed steel-reinforced.

And then we fell down, and we locked arms. We knocked the dresser over as we rolled across the floor

"When enraged and in heat, a female troll can mate up to 80 times in one night. Be ya prepared?"

Walky *tangled in a heap with Joyce, surveying the remains of the room--utterly wrecked save for the chair* Whew...whew...uh...Joyce, we kinda...should we...
Joyce The chair! THE CHAIR!

Sabine: You can do anything you want with me... You can't honestly tell me this didn't cross your mind while we were fighting, can you? I promise: this time, when I manhandle you, it will feel a LOT better.
Roy: Anything I want, you say?
Sabine: Anything.
(Next panel: Sabine crashing through a window and falling several stories)
Roy: Hey, you were right. That DID feel better than before. Nice piercings, though."

Molotov: You took my eye!
Brock: After you took... my heart.

Lrrr: You will want to retreat to a safe 500 meter radius!