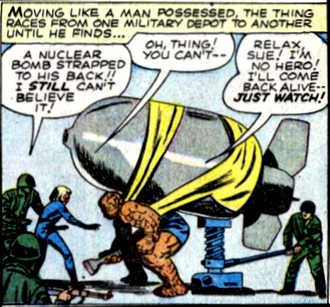 The right tool for the right job.

This is a situation where nukes and only nukes will do. Something Very Bad has happened, and only an uncontrolled release of nuclear energy can fix it. Occasionally, you get the curious situation where nukes are being used to fix a problem created by another nuke. Deus Ex Nukina is distinct from Nuke'Em, because the application of a nuclear bomb solves a problem. Such applications are sometimes contrived and occasionally approach the arbitrariness of Green Rocks.

The most interesting dramatic element of Deus Ex Nukina is the requirement that the nuclear device must be delivered by hand. Robots and missiles can't be trusted; nukes are delivered by men. The delivery method is half the fun and often involves physical contact with the device. The bomb should often have a sleek, eroticized design. Frequently, the courier must also make the ultimate sacrifice and stay with the bomb to trigger it manually.

Not to be confused with I Love Nuclear Power.

For when the nuke does something that actually makes sense, you want the Nuclear Option.

Examples of Deus Ex Nukina include:

Retrieved from "https://allthetropes.org/w/index.php?title=Deus_Ex_Nukina&oldid=1706111"
Categories:
Cookies help us deliver our services. By using our services, you agree to our use of cookies.