Everything About Fiction You Never Wanted to Know.
(Redirected from Diablo 2)
Jump to navigation Jump to search 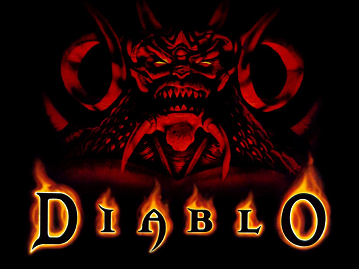 Stay a while and listen.
—Deckard Cain

Note: This page is for the first two games. Diablo III has its own page.

A Hack and Slash videogame series from Blizzard Entertainment. Notorious for having an elaborate backstory and plot that nobody ever follows concerning a war between Heaven and Hell. As a sort of simple graphical Roguelike, the pursuit of the perfect randomly-generated equipment and character build to satisfy one's inner Munchkin gives the game tremendous replayability.

The first game was essentially a huge dungeon crawl, consisting of 16 levels of increasing difficulty under Tristram, the only town in the game, where various NPCs provide you with quests, healing, and equipment. The goal was to get to the Big Bad Diablo in The Very Definitely Final Dungeon. The non-canonical third-party expansion pack Hellfire added eight new separate levels, four new quests (a quest to kill another Diablo-esque baddy in the crypt near the church, a quest from Lester the farmer, a cow quest and a quest to retrieve a teddy bear) as well as three more characters (Monk, Bard and Barbarian) in addition to the original three (Warrior, Rogue and Sorcerer), but you had to enter a special edit to a text file to get the last two of those quests and new characters.

The second game followed the storyline, which ended with the protagonist of the original game implanting Diablo's soulstone into his own forehead (it's implied that it was the warrior). Despite remaining at 640x480, it brought numerous gameplay improvements and was now broken into four acts, each with its own town and six quests per act (except Act IV, which had only three). The expansion pack Lord of Destruction added 800x600 resolution, two new characters (Assassin and Druid) in addition to the original five (Barbarian, Necromancer, Amazon, Sorceress and Paladin) and added Act V, in which, after defeating Mephisto and Diablo in the original game, the player confronted Baal, the last of the three Prime Evils.

The third game in the series, Diablo III, was announced in June 2008 and was released on May 15th, 2012. Trailers for it are on Blizzard's homepage.

See also Baldur's Gate: Dark Alliance and its spiritual successor Champions of Norrath. A character sheet is on the works.

"You knew it would eventually come down to this. Kill Baal. Finish the game!"