Did Mom Just Have Tea with Cthulhu? 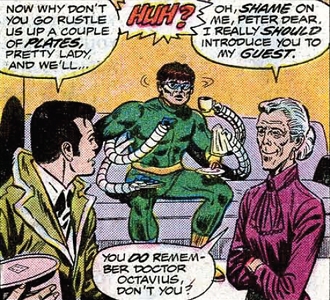 Won't Peter be excited? Otto can be just like dear Uncle Ben!

After a hard day of fighting the forces of not-niceness, the hero goes home for some much needed rest. But who should they see having tea with their mom[1] but the Big Bad! The sheer, mind-breaking disconnect of the embodiment of strife, hatred, evil and missing-left-socks engaging in polite conversation over tea and snack will throw the hero into a combination of wordless shock and sheer panic. She invited him in.

This is usually a horrifyingly difficult dilemma for the hero, doubly so if they have a Secret Identity. Attacking the villain outright will endanger their loved one and reveal the secret... that is, if the villain isn't secretly training a gun on them as a form of collateral to enforce a civil, if tense, social exchange. What usually happens is the Big Bad gets the first move and delightedly forces the hero to play along, as if they really were having tea with a friend. Expect the hero, villain and Innocent Bystander to have a tense (and potentially hilarious) veiled conversation.

This is not a gender-specific trope, despite what the name implies. It could be a mother, uncle, daughter, nephew, or stepfather entertaining the villain. The important part is that this is a relative very close to our protagonist.

A few things can happen from here:

Examples of Did Mom Just Have Tea with Cthulhu? include:

Retrieved from "https://allthetropes.org/w/index.php?title=Did_Mom_Just_Have_Tea_with_Cthulhu%3F&oldid=1576858"
Categories:
Cookies help us deliver our services. By using our services, you agree to our use of cookies.