Died in Your Arms Tonight 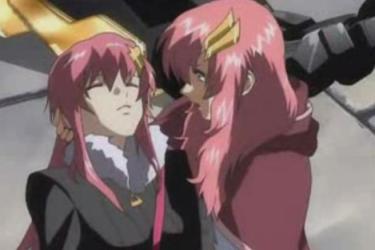 Death Is Dramatic, depressing, and emotional enough, but sometimes, just for the extra emotional kick-in-the-gut Tear Jerker, the author will make a character die in the arms of a futile onlooker. As the onlooker (usually one of the dying character's True Companions) holds them dearly, the dying may flash them a smile or make a final dramatic statement before finally closing their eyes and succumbing to their fate.

If this is done on an Anyone Can Die show, expect the character to be Killed Off for Real (usually). Can turn into It's Personal for the witness, and very often overlaps with How Dare You Die on Me! and Dying Declaration of Love. May be an extension of the refusal to let your loved one Die Alone.

Compare with Pietà Plagiarism, the pose characters generally find themselves in, Cradling Your Kill, when a character dies in their killer's arms, and Deadly Hug, where the victim is killed during the embrace. Contrast Intimate Healing, where a wounded or ill character is less likely to die while in a loved one's arms. (Though strangely enough, intimacy is exactly what's being referenced by the Cutting Crew song.)

Examples of Died in Your Arms Tonight include:

Retrieved from "https://allthetropes.org/w/index.php?title=Died_in_Your_Arms_Tonight&oldid=1904937"
Categories:
Cookies help us deliver our services. By using our services, you agree to our use of cookies.