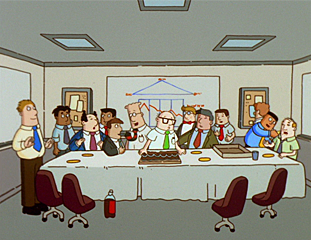 Where have I seen this before?

Animated version of Scott Adams' cult comic that ran for two seasons, starring the voice of Daniel Stern as Dilbert, an engineer working for a soulless and bureaucratic corporation, underneath an incredibly thick-witted, Pointy-Haired Boss (Larry Miller). The opposite of him in almost every way is his dog, Dogbert (Chris Elliott), a morally gray genius who constantly exploits Dilbert, Dilbert's company and everyone else with consummate ease.

The theme song was a revision of Danny Elfman's opening theme from Forbidden Zone.

Can be watched on Hulu here, but only from within the U.S.

Aside from the tropes carried over from the comic, tropes used in Dilbert (animation) include:

Loud Howard: WHY DO YOU ALWAYS SAY THINGS YOU KNOW WILL HURT ME?!

Dilbert: But he's the embodiment of all that is evil and loathsome in the world!
Alice: Just because it's written on a bathroom wall doesn't make it true.
Dilbert: He wrote it!

Dilbert: I didn't know you wanted kids, Alice.
Alice: I didn't (turns to gaze lovingly at the baby she's holding) until right this moment.