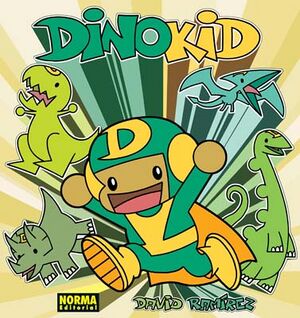 Dinokid is a comic book series created by the Spanish author David Ramirez, author of the popular comic Minimonsters. Like his predecessor, it was published monthly in the ¡Dibus! magazine from 2000 to 2015. However, they were published as comic strips.

The story is about the hilarious adventures of Dinokid, a kid who can transform into all kinds of dinosaurs thanks to the powers of a magical egg. Later, there were introduced more kids with powers similar to him, as well as some villains (so to speak) who antagonize the kids.

Tropes used in Dinokid include:

AnfiBoy: Are you calling me fat?