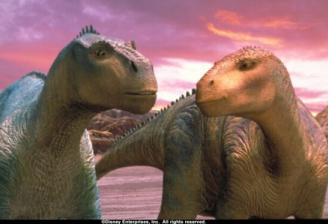 Dinosaur is a unique Disney animated film from the year 2000. It is a hybrid of live-action photography for its settings, and CGI animation for its characters, special effects, and whatnot.

The hero is Aladar, an Iguanodon. His egg was separated from his family through a very convoluted turn of events, and made its way to an island. There, he was found by a family of lemurs, who adopt him when he is born (although the patriarch lemur opposes initially). Time passes offscreen and afterwards we see the adult Aladar living care-free with the primates in the island.

Sadly, meteors destroy the island and Aladar and his adoptive family must make their way to the mainland. Once there, the main plot kicks in and they join a herd of similarly displaced animals who are migrating through the vast, trackless desert with treacherous terrain and scary-looking predators who don't talk. They are seeking literally greener pastures, a valley known as the Nesting Grounds, which is apparently the only fertile land for miles around. The herd is led by Kron, an old, hard-assed Iguanodon -- the first member of his own species Aladar has ever met -- who insists that everyone follow his orders even if it kills them all. He refuses to make concessions for the oldest and youngest members of the herd, an issue that he and Aladar especially lock horns thumbspikes over. Eventually, Aladar and the herd members he has befriended find their way to the Nesting Grounds through The Power of Friendship, and they return just in time to rescue the rest of Kron's herd from menacing predators and show them the way.

It is usually considered one of the weakest films in the canon, but still managed to be better than some later films that will go unmentioned. The main point of criticism is how similar it was to Don Bluth's The Land Before Time. Disney had been accused of copying other works before, but unlike the well-loved The Lion King, the work was unable to stand on its own merits. In addition, while the portrayal of Velociraptors as wiry, small pack hunters instead of misnamed Deinonychus is surprisingly accurate, much of the rest of the films' depiction of late Cretaceous-era life is woefully inaccurate, particularly in the portrayal of Carnotaurus as a Tyrannosaurus Rex knock-off, and the eerily human lips of the Iguanodons. That said, the film is gorgeous to look at, and did well financially, but ultimately fell far short of Disney's work in the Renaissance. To add insult to injury, it outperformed a vastly superior Disney film released in the same year.

Tropes used in Dinosaur include:
Retrieved from "https://allthetropes.org/w/index.php?title=Dinosaur&oldid=1922118"
Categories:
Cookies help us deliver our services. By using our services, you agree to our use of cookies.