Everything About Fiction You Never Wanted to Know.
(Redirected from Dirty Commies)
Jump to navigation Jump to search 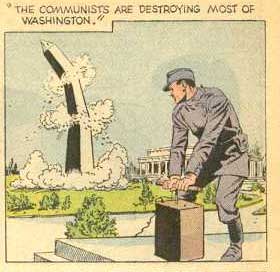 Dirty Communists are, essentially, Cold War-era villainous portrayals of the Soviet Union's people. After World War Two, there was a very large effort to make them stock villains the same way Those Wacky Nazis were and still are. Special attention is brought to emphasizing all those wacky tropes found in Glorious Mother Russia.

Although Dirty Commies reached its height with the Cold War, the trope began at the turn of the 20th Century as communism and anarchism began to take root in the capitalist powers. Indeed, even before that, the title "The Communist Manifesto" itself was an ironic attack on Europe's fear of "communism," at the time meaning a return to loosely-allied city-states.

Given the fact that the Soviet leadership was often tremendously paranoid and ran large-scale systems of political repression and censorship, the Soviet government's reputation in the west is bound to be very negative. This trope, however, is for when the previously mentioned evils of the Soviet Union are caricatured or used for comedic purposes (as pictured). With the end of the Cold War, this has become a mostly Discredited Trope, though it oddly has a lot more universal success with Post-Soviet villains than it has ever had with actual Communist ones. Related to Red Scare. It remains a significant legacy trope that many authors still use.

See Red China for a similar trope dealing with that other Communist power.

Examples of Dirty Communists include:

He then presses a button on his desk and the Soviet banner drops in Red Square, the turf rolls back and the Berlin Wall complete with guards and dogs rises out of the ground, and Lenin busts out of his tomb, yelling "Must crush capitalism!"

Retrieved from "https://allthetropes.org/w/index.php?title=Dirty_Communists&oldid=1566490"
Categories:
Cookies help us deliver our services. By using our services, you agree to our use of cookies.