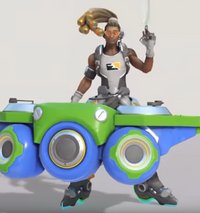 "We move (boost and speed up) together as one."

Technology that heavily involves music, usually either activating things, or somehow being a power source.

This cannot be music for puzzle solving, or things like that. It has to be technology using music.

Name is a pun on the term "discotheque".

Magic Music is the magic counterpart to this trope.

If the music is used as a weapon, you're looking for Musical Assassin.

Examples of Disco Tech include: