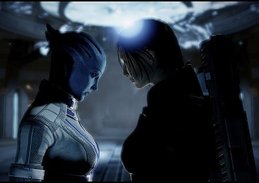 "[...]Why is lesbian sex only OK if it involves another species?"
—Joystiq.com, on Mass Effect

They look exactly like hot women, and they make out with other hot women. But they're actually aliens/immortals/bodysnatchers/etc. So it's not really gay, right?

Discount Lesbians are canon homosexual characters and couples who are either not human to begin with, come from alternate realities, have been magically or technologically altered in ways that affect their sexuality, etc., so that they don't really "count". This usually seems to be a device used within the story to maintain a status quo that lets the (presumed) audience watch two hot chicks making out without having to think about the associated real-world issues of homosexuality. On the other hand, the trope may come into play if the writer wishes to include a lesbian relationship in the story but is too spineless and terrified of the Moral Guardians, thus becoming a way for a weak willed Rule-Abiding Rebel to make an attempt at Getting Crap Past the Radar.

Note that they're Discount Lesbians only if they're included in the story in a way that obviates the need to address the associated issues of sexuality or the rights/history/lifestyle issues faced by or associated with gays in the real world. This is usually done through othering homosexuality by associating it only with characters who have conspicuously different traits from the viewers - Discount Lesbians. Characters used to draw attention to those issues are inversions. If they're stated to be homosexual they're not Discount Lesbians, just a non-human who happens to be gay.

Compare Have You Tried Not Being a Monster?, Lesbian Vampire, Bury Your Gays, and (occasionally) Elfeminate. Related to Space Jews for aliens standing in as minorities. Related to Hide Your Lesbians in that both are a way of including apparently gay content without admitting to it.

Examples of Discount Lesbians include:

I am going to bed now. See you later. This you I hope.

"We don't call it 'Paradise Island' for nothing."

Shepard: You want a relationship with me? Even though we are both women?
Liara: We Asari are mono-gendered. "Male" and "Female" doeesn't have any meaning for us. We do, however, have maternal instincts. So perhaps we would fill what you consider a female role. I am sorry if this is awkward for you, Shepard. I'm only trying to be honest. I feel as we share some type of conection. [...] what about us, Shepard? Is there a mutual atraction? Or was I wrong about that too?
Shepard: No, you were right. There is something between us.
...
[And if she chooses to drag Kaidan along we get this:
{Kaidan confronts Shepard and Liara]
Kaidan: Dr. T'Soni. Commander. We need to talk. The three of us.
Liara: This is a rather awkward situation.
Kaidan: I am not trying to make anyone unconfortable, I am just trying to figure out where I stand.
Shepard: I guess I should have seen this one coming.
Kaidan: I'm not jealous; I am just confused. I thought we had something Ma'am. I didn't realized that you were a ... Well, that you prefer other women.
Liara: I am not exactly a woman lieutenant. My species only have one gender.
Kaidan: Yeah, but you look ... never mind. Look Shepard, just make your choice.

"I don't think they're lesbians so much as..."
"Pfft. Like I care about technicalities."

Gabe: It's not gay if it's an elf.
Tycho: I'd love to know why you have a rule for that.