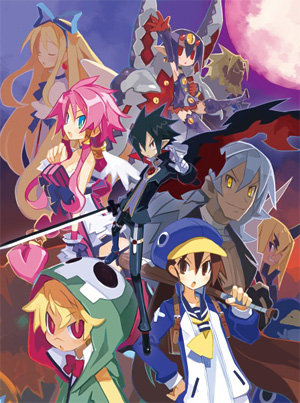 Disgaea 4: A Promise Unforgotten is the fourth game in the Turn-Based Strategy series Disgaea by Nippon Ichi. The game revolves around Valvatorez—a vampire who forbade himself from drinking human blood after he made a promise 400 years ago—and his campaign of reformation against the corrupt government of the Netherworld. With him is Fenrich, his loyal demon wolf servant, and Fuka Kazamatsuri, a deceased middle-school student who was sent to the Netherworld and should have been turned into a Prinny, but because of budget cutbacks just had a Prinny hat slapped on her instead.

Other characters include Vulcanus, the Angel of Avarice; Emizel, the son of the Netherworld President; and Desco, a monster girl whose ambition is to become the Final Boss. Axel returns as the warden of Hades and Valvatorez' boss.

Features include true high-resolution sprites (with the option of switching to the traditional low-res sprites), new Magichange commands and the ability to use a pirate ship to invade and plunder other players' games.

Tropes used in Disgaea 4: A Promise Unforgotten include:
Retrieved from "https://allthetropes.org/w/index.php?title=Disgaea_4:_A_Promise_Unforgotten&oldid=1897132"
Categories:
Cookies help us deliver our services. By using our services, you agree to our use of cookies.