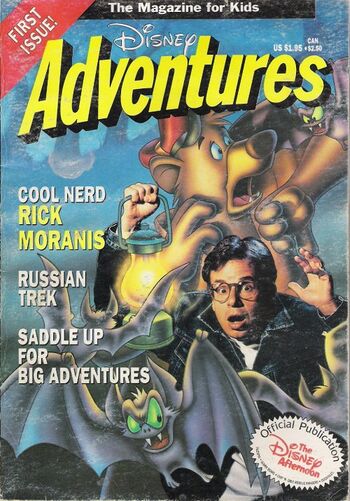 Rick Moranis and Baloo, together at last!

Disney Adventures was a magazine that started printing in 1990 by The Walt Disney Company. If you were a kid at any point between then and 2007 (when the magazine was canceled), you more than likely begged your parents to buy you at least one copy, because each issue featured a popular Disney character or Hollywood celebrity on its front cover.

The magazine basically featured any standard story or article you'd find in, say, Entertainment Weekly, but written in a less formal manner and aimed at kids (there was a period where most of the articles were actually written by kids, for example).

Perhaps the most memorable thing about Disney Adventures, though, were its comics in each issue, which were later consolidated into a single section, the Comic Zone, in 1995. During the early half of the 1990's, the magazine's comics were mainly based on Disney's currently-running animated properties, such as the shows on The Disney Afternoon programming block. Later on, however, the Comic Zone began to expand its horizon to running excerpts of other independent comic books, such as Bone, The Simpsons and Little Gloomy. Then, in 1997, the magazine ran its first original comic, The Adventures of D & A (described here on Platypus Comix), which opened the way for more original properties in the Comic Zone.

During the One Saturday Morning era of Disney Television Animation, the Comic Zone gradually shifted its focus away from Disney's new animated television properties (some shows, like the Hercules series and Teachers Pet ended up getting only one comic, while some like Teamo Supremo never got featured in comic form at all) and instead put it on original comics like Society of Horrors and Jet Pack Pets (although they would still occasionally feature a short comic based on one of the Disney Animated Canon films, particularly if there was a new video release coming for the film in question). From then on, whenever a Disney animated property did get a comic story, it was a rare occasion that the story would be longer than four pages.

The magazine was suddenly canceled in 2007...two issues after it celebrated its 17th anniversary.

Notable comic and storylines published in this magazine include:

Additionally, Disney cartoons, films, and TV shows that got featured in comic form in the magazine:

Tropes used in Disney Adventures include:
The Comic Zone contained examples of:
Retrieved from "https://allthetropes.org/w/index.php?title=Disney_Adventures&oldid=1633830"
Categories:
Cookies help us deliver our services. By using our services, you agree to our use of cookies.