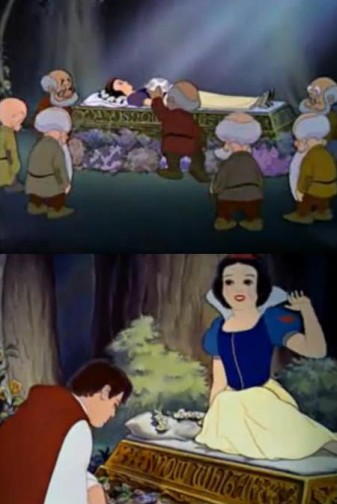 Beloved major character is seemingly killed at the climax of the movie/episode, hearts are wrenched, four-year-olds are traumatized, grown men are reduced to tears, and then—oh look, the character is Not Quite Dead after all. "I thought you were dead!", they recite before walking off into the sunset.

A variant is the Robot Disney Death where a Robot Buddy is seemingly destroyed in a Heroic Sacrifice. While at least one character mourns, the robot reappears fully repaired after an extensive period in Mr. Fixit's maintenance shop good as new and touched by all the concern.

Animated films seem destined to have these, considering the target audience is primarily young kids, and nobody wants to give a Downer Ending to them. Writers who are considering implementing it need to be extremely careful, as it can very easily come across as a tacky and cliched way to add some cheap drama to the ending. Also, it tends to happen to emphasize that the villain's death is his/her own fault, so as not to make the hero (or heroine) look like a killer. And probably been done to—um -- death, and audiences now expect it. You run the risk of making your viewers remember they're watching television, even if it does shut up the Media Watchdogs.

Named after its frequent use in the Disney Animated Canon, though even Disney likes to kill 'em off for real now and then.

See also Sorting Algorithm of Deadness, for how likely this is to happen, and Our Hero Is Dead, for when this is used as a Cliff Hanger. If used comedically, may overlap with Unexplained Recovery. If done on a massive scale, it's a World-Healing Wave.

Examples of Disney Death include:

im
Retrieved from "https://allthetropes.org/w/index.php?title=Disney_Death&oldid=1877667"
Categories:
Cookies help us deliver our services. By using our services, you agree to our use of cookies.