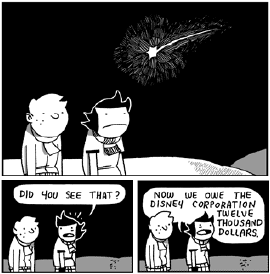 Trademarks are distinctive signs or symbols used by a person or company to promote and differentiate their products and services from the competitors. They typically consist of a name, word, phrase, logo, or combination of the four, and are distinctly associated with their brand. See the article on the subject for an in-depth explanation.

Trademarks belong to a category called "intellectual property rights", alongside similar concepts called copyrights and patents. A full discussion of their definitions and purpose is beyond the scope of this wiki, but the three terms all bear a common theme: They acknowledge creation or ownership of something, and provide the owner with some control over how it gets used. If somebody else attempts to use it commercially without the owner's permission (often with an exchange of money involved for such permission), the owner can take them to court and sue for damages.

Now, in Real Life there are certain rules and limitations on what does and does not constitute an infringement, and what is and is not eligible for protection under intellectual property rights laws in the first place. But there are no such limitations in fiction! Some corporations (for example, Mega Corp) are so damn powerful and wield so much influence that they can put a stamp of ownership on literally anything. The grass in your front yard? Patented by a gardening company. The morning sunrise? Copyrighted. The name of your favorite pet? A bright sunny day? The word "the"? Yes, them too. If it exists, then somebody, somewhere, has stamped a copyright or trademark upon it, regardless of common sense or reason, and they'll happily send out their Army of Lawyers to collect royalties at even the slightest hint of infringement.

Related to Tradesnark™, where big companies not only have trademarks on common words, but insist on using the TM at all times to remind people of it.

Some of these examples will seem pretty out there, but as Robert Ripley always said...

Examples of Disney Owns This Trope include:

Retrieved from "https://allthetropes.org/w/index.php?title=Disney_Owns_This_Trope&oldid=1873128"
Categories:
Cookies help us deliver our services. By using our services, you agree to our use of cookies.