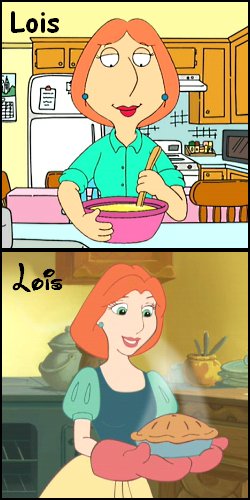 So that's where "those good, old-fashioned values, on which we used to rely" are.

Disneyesque is basically any non-Disney work adopting an art style that is typical of the Disney Animated Canon, for the purpose of an Homage, Affectionate Parody, or even a Take That, to the Disney style.

Well at least the stereotypical style is adopted. Regardless of the actual variety of the art in Disney films, many people think that all Disney films have the same general look, with traits such as:

This can appear in a TV show, a comic book or a feature-length film; and it doesn't matter if this style lasts through the entire work or is just an Art Shift for a single scene. It can involve a character having a pleasant fantasy, even overlapping with Disney Creatures of the Farce or the Roger Rabbit Effect.

Animesque is a Sister Trope... or might even be a Sub-Trope, depending on how much you take into account Osamu Tezuka basing his style on the various Walt Disney works.

Not to be confused with Disneyfication, All Animation Is Disney (though it could easily lead to that), or being a Follow the Leader to Disney films.

Examples of Disneyesque include:

UNSORTED - the internal link points at a disambiguation page