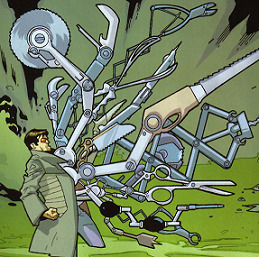 No matter what the situation, no matter who the foe, not only did the robot's creators think of it, but the robot has the counter already built in.

Whenever the robot runs into trouble, it has exactly the gadget it needs to get it out. No matter how strange or unlikely the situation, the robot simply has to retract an arm or open a panel, and out comes a gadget that seems to have been added for exactly that purpose. It also probably carries an Everything Sensor, to spot the problem in the first place ("Danger, danger, Will Robinson!")

This trope is specific to the gadget-laden robots of movies and TV shows before and during the 1980s.

Justified in the case of robots that have access to some kind of Shapeshifting or a (usually internal) Matter Replicator. Not so justified when you are simply left to assume that the robot somehow has room for all those gadgets inside of them.

This trope doesn't apply just to robots, but it is most common among them.

See also Super-Powered Robot Meter Maids and Adaptive Armor. Compare to Crazy Prepared, which is the human equivalent. When it has never been hinted at before it's New Powers as the Plot Demands. Compare Robot Buddy. May overlap Swiss Army Weapon and Telescoping Robot.

Examples of Do-Anything Robot include: