Everything About Fiction You Never Wanted to Know.
< Doctor Doom
Jump to navigation Jump to search 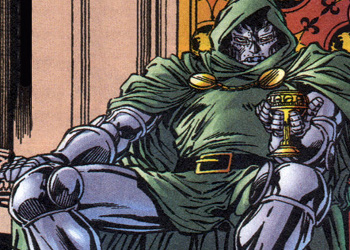 SILENCE, Troper! You are not worthy to describe the glory of DOOM! This task can be achieved only by DOOM himself! That is why Doom honored this useless wiki with his presence. Sit and enjoy the tale of the greatest Evil Overlord and Mad Scientist that ever lived, as well as the greatest Badass who could easily Take Over the World if not for that Blasted...(seethes) Reed. Richards. (deep breath) RRRRRRICHAAAAARRRRRDDDSS!!!

I began to master both magic and technology, and when my fame reached the United States, I gained the opportunity to study in America. There I met Reed Richards, one of the few men on the planet whose intelligence can even approach my own (and then not by much, I can assure you). Wishing to resurrect my dead mother, I manipulated the fool into helping me construct a portal to hell; however, whether due to Reed's incompetence or intentional sabotage on his part out of jealousy for my genius (perhaps both), the device exploded and damaged my face.[1] I rightfully blamed Richards for the accident and withdrew from society for some time.

I then joined a mysterious order which taught me secret knowledge, including metallurgy. I used it to create a suit of Power Armor I have used (with some modifications) since that day. From that moment, and forever more, I have been known as Doctor Doom. I overthrew the previous ruler of Latveria and claimed it as my own, becoming the new dicta- ruler of my country. Quickly my path crossed with the Fantastic Four, who became my sworn enemies. However, I have also fought with almost every superhero in the Marvel Universe - The Avengers, X-Men, Spider-Man, The Incredible Hulk, Iron Man, The Mighty Thor, Luke Cage - all have contested me, and some have even succeeded in temporarily arresting my plans[2][3] Due to that, I am considered Marvel's most iconic villain. TROPERS DON'T NEED TO ALWAYS MENTION SQUIRRELGIRL IN THE SAME BREATH AS DOOM. Doom is more than just that one trifling incident.

On that account, I have had more serious setbacks such as when that cursed Richards enabled me to be deposed in favor of Prince Zorba. However, I eventually regained the throne with the help of Richards and his compatriots when I showed them that Zorba was laying waste to Latveria in his murderous madness. True, in their eyes they were participating in my retaking of the throne entirely for the sake of the oppressed people of Latveria, and that was good enough for me.

Rumor even has it that the film-maker, George Lucas, took inspiration from myself to create that cultural icon, Darth Vader. How fortunate for him that Doom has better things to do than indulge in petty litigation or more direct means with him.

Tropes that have been deemed worthy of Doctor Doom

Retrieved from "https://allthetropes.org/w/index.php?title=Doctor_Doom/Self_Demonstrating&oldid=1873356"
Categories:
Cookies help us deliver our services. By using our services, you agree to our use of cookies.