Everything About Fiction You Never Wanted to Know.
< Doctor Who
Jump to navigation Jump to search 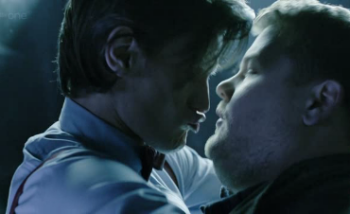 "Doctor, are you going to kiss me?" -- "Yes, Craig. Yes I am. Would you like that? Bit out of practice but I've had some wonderful feedback."

(For the interested, you can read a blow-by-blow account (pun unintended) of every suspicious moment from almost the entire series and spinoffs (though the DW section stops with The Waters of Mars) here. )

Captain Jack Harkness exhibits rampant omnisexuality and a proclivity for flirting with anything that can say hi. He also kissed the Doctor before any of the other new companions did. In fact, his spinoff show, Torchwood, is based entirely upon the premise that bisexual alien hunters are hot. Kinda strange that the Master just kept killing him over and over for a year (he also calls him "handsome" and keeps him chained up in the basement though), but then again, maybe the Master gets off on it—he's tried to kill the Doctor often enough.

Where to begin with Fitz Kreiner and the Eighth Doctor from the Eighth Doctor Adventures... Over the course of their fifty-something books together, they become Not-So-Heterosexual Life Partners. EDAs can be divided up into "Fitz and the Doctor are rather gay for each other" books and "Fitz and the Doctor are really gay for each other" books. A few examples: