Everything About Fiction You Never Wanted to Know.
< Doctor Who‎ | Recap‎ | S29
Jump to navigation Jump to search 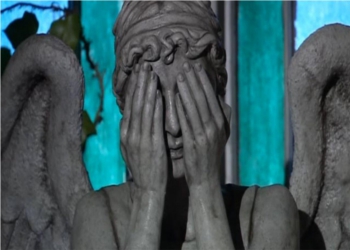 Blink was written by Steven Moffat and netted a ton of awards for both writing and acting. It also ultimately lost a Nebula Award for Best Script to Pan's Labyrinth.

It is a Doctor-lite episode, based on a short story written by Moffat for the 2006 Doctor Who Annual, titled "'What I Did On My Holidays,' by Sally Sparrow" (The BBC has kindly put this up on their website.)

"Blink" revolves around Sally Sparrow (played by Carey Mulligan), a clever, spunky young woman who visits an old mansion called Wester Drumlins in 2007 and finds a spookily-detailed message from the Doctor written in 1969. The message tells her to "beware the weeping angels" and "by the way, duck!" She ducks, and a ceramic pot of some sort smashes into the wall just behind her head. Seeking the attacker, she sights an angel statue in the garden.

Sally leaves Wester Drumlins, and the next day, goes to visit her friend, Kathy Nightingale. At Kathy's house, Sally notices a TV set playing a DVD of the Doctor, apparently talking to thin air. She also meets Kathy's brother Lawrence (Lawrence Nightingale, get it?), who has apparently just stepped out of the shower and forgotten his towel discovered that sleeping in the nude helps with those tricky midnight leaks. Sufficiently Genre Savvy viewers know what's coming next, despite Moffat trying to throw a curveball by reversing the genders of the protagonists.

Anyway, Sally convinces Kathy to come with her to Wester Drumlins. When someone knocks on the door, Kathy stays behind in case of danger, while Sally investigates. Completely off-screen, the angel from the garden approaches, appearing ever closer as the camera angle changes...

Meanwhile at the door, a strange man approaches Sally with a letter, written by his grandmother: Kathy Nightingale. Sally opens the letter to find that it is indeed from Kathy, who was thrown back in time to 1920.

Sally takes one last look around Wester Drumlins, unable to find Kathy, and takes a TARDIS key hanging from the hand of one of the stone angels. While her back is turned, one of the statues apparently moves, its hand grasping for her as she walks away.

After visiting Kathy's grave, Sally heads out to fulfill Kathy's last request and convey her love to Lawrence (AKA Larry). At the DVD shop where he works, Sally gets into an argument with the same recording of the Doctor. Since he appears to be talking directly to her, she soon gets creeped out and yells at the Doctor to stop being so weird ... at which point, Larry shows up. He tells her that the video of the Doctor is an Easter Egg on 17 apparently unconnected DVDs, and that nobody seems to know what it's about, though he and his online friends have thoroughly dissected every line in search of answers.

Sally gives him an edited version of Kathy's message, collects a list of the DVDs with the Doctor Easter Egg, and then steps out of the back room, her head still spinning. The man behind the counter shouts “Go to the police, you stupid woman! Why does nobody ever just go to the police?” Sally is startled, but relaxes when she sees that he's watching a B-Movie. (You can practically see Moffat winking at the audience).

This explicit Lampshade Hanging leads her to take the counter-jockey's inadvertent advice, and Sally heads over to the Police Station—followed by the Weeping Angels. At the station, she meets a Police Inspector named Billy Shipton, who flirts with her shamelessly, blissfully unaware that The First Guy Wins (though he is encouraged by a Freudian Slip on her part.) He also shows her a garage full of cars whose owners have disappeared in or around Wester Drumlins in the past few years. The prize of the collection is an imitation police box built entirely to scale which nobody can manage to open (they know it's fake because the phone's just a dummy and the windows are the wrong size).

Sally responds to Billy's come-ons by giving him her phone number -- "Just a phone number"—and then leaves. Billy returns to the garage to find it infested with four angelic statues. The camera zooms in on his face until he blinks, at which point he disappears.

Minutes later, Sally receives a phone call from Billy. She follows his directions to a hospital, where she finds the now-40-years-older Billy Shipton. Just before he dies, he tells Sally that he met the Doctor in 1969, and the Doctor gave him a message for her. He also reveals that in the interim years he got into publishing, eventually DVD publishing. His company published all 17 DVDs with the Doctor's message on them, and asks if she's figured out the connection between them.

Sally stays with Billy until he dies. Then she calls Larry to tell him what the DVDs have in common: they're all the DVDs she owns. Larry is incredulous to learn that Sally only owns 17 DVDs, but quickly agrees to meet Sally at Wester Drumlins, along with a DVD which has the Easter Egg.

At Wester Drumlins, they set up a portable DVD player and, on noticing an Angel in the garden, Sally tells Larry to keep an eye on it. The following sequence is one of the biggest Time Paradox Mind Screws you will ever encounter, with Sally and the Doctor carrying on an extended conversation even though the Doctor is speaking to a video camera thirty-eight years in the past. The Doctor's attempt to explain the temporal mechanics of the situation gives us the Trope Namer for the Timey-Wimey Ball. When asked how he knows what she's going to say, the Doctor responds "Look to your left." Sally does so—to find Larry scribbling her lines into his copy of the transcript of the Doctor's dialogue from the DVD Easter Egg (adding a necessary but slightly cool-dampening modicum of plausibility to the sequence). The Doctor reveals he has a copy of that completed transcript as he records his part.

The Doctor also explains the nature of the Weeping Angels: they feed on "potential energy," meaning the energy a person would have expended if they lived into the future, but do not expend if they live out the rest of their lives in the past. As he remarked earlier to Billy, they're the only psychopaths in the universe who kill you nicely: send you back to the past, let you live yourself to death.

Doctor: They're quantum locked. They don't exist when they're being observed. The moment they are seen by any other living creature, they freeze into rock. No choice, it's a fact of their biology. In the sight of any living thing they literally turn to stone. And you can't kill a stone. 'Course, a stone can't kill you either, but... then you turn your head away. Then you blink, and oh yes it can!

The Doctor tells Sally and Larry that the Angels have the phone box, and if they can get in it, they'll be able to feed on the time energy inside ... and do enough damage to switch off the sun. Sally has the key, so it's up to her to open the TARDIS first and send it back to the Doctor.

His explanation done, the Doctor, noting that his transcript has ended, gives Sally and Larry these last words of advice:

Doctor: And that's it, I'm afraid. There's no more from you on the transcript, that's the last I've got. I don't know what stopped you talking but I can guess. They're coming. The Angels are coming for you, but listen -- your life could depend on this -- don't blink. Don't even blink. Blink and you're dead. They are fast, faster than you could believe. Don't turn your back, don't look away, and don't blink. [[[Beat]]] Good luck.

It is at this moment, of course, that Sally and Larry realise that neither of them have been looking at the Angel in the garden. After a moment's pause, they look up to see it standing only a few metres away, poised to attack. Sally goes to look for an exit, leaving Larry to stare at the Angel. He looks away for a split second, and when he looks back, the Angel's hands are inches away from his neck.

Sally finds the TARDIS in the mansion's basement, and she and Larry make their way down the stairs. However, the Angels follow them, and one (suddenly displaying a proficiency for telekinesis) causes the only lightbulb in the room to flicker on and off. Sally and Larry make it inside the TARDIS just as the Angels reach them.

They then discover that Larry's DVD functions as a TARDIS-activation key, slot it into the TARDIS' handy Plot Coupon drive and then watch as the TARDIS dematerializes without them. The Angels have surrounded the TARDIS by this point, and when it disappears, they're stuck looking at each other—forever. Whoops.

Fast forward one year. Sally and Larry now run an Antiquarian book and rare DVD shop, which Sally insists is all there is between them, at least partly because she's too focused on investigating what happened to them.

Then the Doctor and Martha walk by, in a hurry to deal with -- well, a couple of things and a lizard. Neither the Doctor nor Martha recognizes Sally, which leads her to realise that for them, the events of the episode haven't taken place yet. She also realises that the very convenient folder containing Larry's complete transcript of the 38-year conversation and various other details regarding the "Weeping Angels" affair is the source of the Doctor's knowledge about the incident. She gives the Doctor the folder, and tells him to use it the next time he gets trapped in 1969.

Larry walks up just in time to see Martha and the Doctor off. Then he and Sally walk back into the store, their clasped hands indicating that they are about to have a Relationship Upgrade. Then the camera lazily travels upward ... and halts on a gargoyle on the roof above.

What follows is 29 seconds of pure paranoia-fuelled Mind Screw, as we return to the last few seconds of the Doctor's video:

Sally: 'Kay, that was weird. Like you can hear me.

The Doctor: Well, I can hear you.

Sally: Yeah, I've seen this bit before. You said that sentence got away from you.

Sally: Next thing you're going to say is, "Well, I can hear you."

The Doctor: Well, I can hear you.

Sally: This is impossible!

Sally: How can you what I'm gonna say?
The Doctor: Look to your left.
Sally looks to her left, and sees Larry transcribing everything she says.
Larry: What does he mean by "look to your left"? I've written tons about that one. I think it's a political statement.

Don't blink. Blink and you're dead. Don't turn your back, don't look away, and don't blirtbgnmjkl--