Everything About Fiction You Never Wanted to Know.
< Doctor Who‎ | Recap‎ | S5
Jump to navigation Jump to search 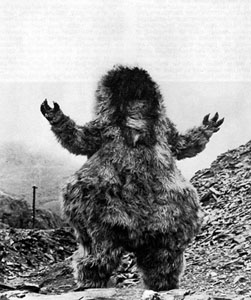 Jamie: Have you thought up some clever plan, Doctor?
The Doctor: Yes, Jamie, I believe I have.
Jamie: What are you going to do?
The Doctor: Bung a rock at it.

The Doctor visits Tibet in 1935 in order to return a sacred bell he was given last time he was there. He meets Travers, an English explorer trying to track down the mysterious Yeti, and the High Lama Padmasambhava, miraculously still alive from the Doctor's last visit hundreds of years earlier.

It transpires that an alien creature - the Great Intelligence - has taken over Padmasambhava, prolonging his life, and that the Yeti seen in the area are robots, there to scare off or kill inquisitive travellers. The Great Intelligence is a non-corporeal creature trying to create a form for itself in order to take over the Earth. The Doctor banishes it back to the astral plane and Padmasambhava is able to die in peace.

Only the second episode remains.