Everything About Fiction You Never Wanted to Know.
< Doctor Who‎ | Recap‎ | S9
Jump to navigation Jump to search 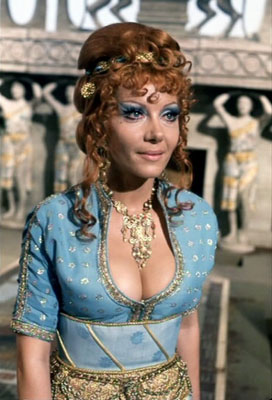 Atlantis during The Seventies.

The Master has a new alias - Professor Thascales (Greek for "Master" - you'd think the Doctor would have cottoned onto this by now), and he is about to switch on his wonderfully-named TOMTIT (Transmission Of Matter Through Interstitial Time) device. The device will give the Master control over Kronos, a "creature from outside time".

It works, but the Master can't control it, and runs away. The Doctor arrives and deactivates the machine, but the Master then switches it back on again, using it to first kidnap an Atlantean high priest and then to trap the UNIT forces in a time-freeze.

Travelling to Atlantis in his TARDIS, the Master hopes to steal the Kronos Crystal and with it gain control of Kronos. The Doctor follows with Jo, but the Master has already seduced Queen Galleia and staged a coup. However, the queen discovers that the Master is responsible for the King's death and turns against him.

The Master unleashes Kronos, destroying Atlantis and taking Jo captive in the process. Both TARDISes escape the destruction and the Doctor and the Master confront each other in the Time Vortex. The Doctor threatens to "Time Ram" the Master, destroying both ships, but can't bring himself to do it. Jo can, though, and presses the button on the Master's TARDIS console. The ram, however, releases Kronos, who rescues the Doctor and decides to punish the Master with eternal torment. The Doctor pleads for the Master and Kronos agrees to release him... only for the Master to take the opportunity to flee instead.