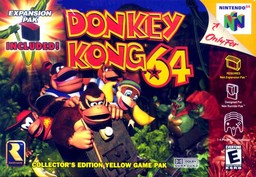 Donkey Kong 64 is a 1999 video game produced by Rare and Nintendo for the Nintendo 64. It's either a sequel to the renowned Donkey Kong Country trilogy on the Super Nintendo or the fourth installment of said trilogy, depending on how you look at it. The game is a 3D third-person action-platformer set within the continuity of the Donkey Kong Country games; it was also the first of two Nintendo 64 to require the Expansion Pack to play it (the other being The Legend of Zelda: Majora's Mask, though Perfect Dark was crippled to the point of being barely playable without it), but fortunately, it came bundled with the package. Structurally and technically, Donkey Kong 64 is very similar to Banjo-Kazooie and Banjo Tooie, especially when it comes to the enormously high amount of items to collect (each stage features, among many other things, five hundred bananas; that's five stages' worth of musical notes in Banjo terms) and in that the player characters must learn special moves before being able to use them by triggering specific button combinations at once.

The plot concerns the return of the Kremlings, that Exclusively Evil race of reptilian humanoids that have been a pain in the Kongs' sides since the original Donkey Kong Country, three years after the end of Donkey Kong Country 3. Once again, under the leadership of King K. Rool, the Kremlings have decided that if they can't have the Kongs' Island, nobody can, and so they plan to blast it right off the face of the earth with their secret weapon, the Blast-O-Matic, which is stored within an enormous, high-tech armored warship version of Crocodile Isle that towers eerily over the Kongs' homeland.

As expected, Donkey Kong leaps into action, ready to bust some Kremling heads and foil their evil schemes, only to find that four of his best friends have been kidnapped and his hoard of solid-gold giant bananas has once again been plundered. As DK, the player must rescue the four other Kongs (all of whom become additional player characters after rescue) and recover all the stolen bananas. Much running, jumping, brawling and dancing ensues, along with a few subplots involving an imprisoned Kong-sympathizer Kremling, a shifty technician named Snide who once worked on assembling the Blast-O-Matic but has come to hate K. Rool, and a magical Banana Fairy whose daughters have mysteriously gone missing. All of these must be resolved in order for the player to achieve 101% completion and witness the true ending of the game.

Tropes used in Donkey Kong 64 include:
Retrieved from "https://allthetropes.org/w/index.php?title=Donkey_Kong_64&oldid=1926003"
Categories:
Cookies help us deliver our services. By using our services, you agree to our use of cookies.