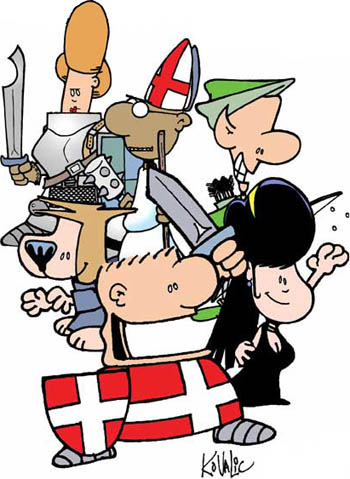 Dork Tower is the name of a comic series by famed game creator, illustrator, and writer John Kovalic. Set in the fictional town of Mud Bay, Wisconsin, it focuses on the gaming adventures and personal lives of the four main characters, a group of geeks whose hobbies and interests include tabletop roleplaying games, video games, miniature games, collectible card games, science fiction and fantasy, comic books, computers, anime and manga -- in short, anything and everything dorks (and Geeks, and Nerds, and Otaku) would enjoy.

The four main characters are:

Supporting characters that frequently appear in Dork Tower include:

Dork Tower began as a four-panel comic in print format, published in various gaming-oriented periodicals such as Dragon magazine and Pyramid. In 2000, it became a four-panel web comic published approximately three times a week. Later, a monthly comic book was published by Dork Storm Press, and featured a mix of single-page strips, multi-page stories, and ongoing character development story arcs. The comic book had been on hiatus as of issue #36 due to personal affairs - despite plans to resume publication in 2011 in annual mini-series releases, it remains solely a web comic as of April 2017. A series of TPB collections reprint the web and print strips. The strip has won several Origin Awards, and the comic has sold over 500,000 copies worldwide.

The official site is here.

Tropes used in Dork Tower include:

Retrieved from "https://allthetropes.org/w/index.php?title=Dork_Tower&oldid=1884150"
Categories:
Cookies help us deliver our services. By using our services, you agree to our use of cookies.