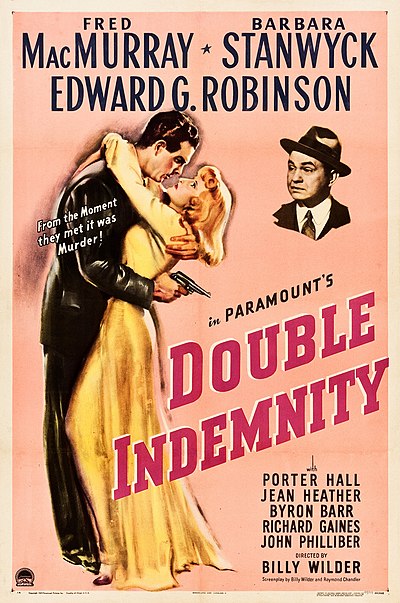 A 1944 Film Noir, directed by Billy Wilder, written by him and Raymond Chandler, and adapted from James M. Cain's earlier novel of the same title, Double Indemnity is considered by many to be the definitive Film Noir and the popularizer of many of its tropes.

Walter Neff (Fred MacMurray) is a successful but bored insurance salesman who encounters Phyllis Dietrichson (Barbara Stanwyck) when he comes to her house to discuss automobile insurance. After the two have traded some innuendo-laden banter, Phyllis reveals that her marriage is not a particularly happy one and the pair end up conspiring to trick her husband into taking out an accident insurance policy -- and ensure that he then meets a tragic "accidental" end.

Neff, who has eleven years' experience in the insurance business, believes that he has the brains to pull off The Perfect Crime. The only obstacle is his colleague and friend Barton Keyes (Edward G. Robinson), the brilliant claims manager who can spot a phony insurance claim a mile away.

The story is told in flashback and narrated by Neff, who is making a confession into his office Dictaphone.

Tropes used in Double Indemnity include:
Retrieved from "https://allthetropes.org/w/index.php?title=Double_Indemnity&oldid=1921940"
Categories:
Cookies help us deliver our services. By using our services, you agree to our use of cookies.