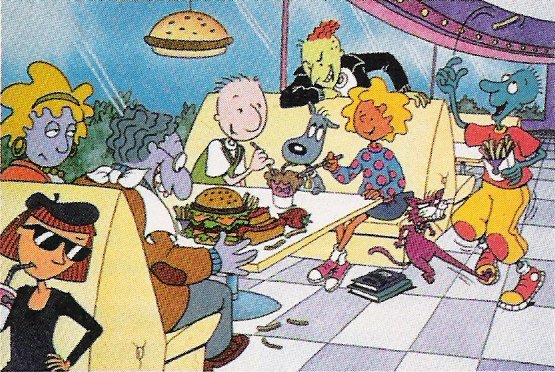 One of the first three original Nicktoons, featuring eleven-year-old Doug Funnie and his experiences with his friends, family and community. Creator Jim Jinkins developed the concept and drew inspiration from his own experiences growing up. Beginning with Doug's arrival in Bluffington, he dutifully writes about his every adventure in his journal, which frames almost every episode. Very early on, he gained a best friend in Mosquito "Skeeter" Valentine, a nemesis in school bully Roger Klotz, and a love interest in the tomboyish Patti Mayonnaise. His dog Porkchop frequently steals the show with his antics, not unlike Snoopy. Many other colourful characters (both literally and figuratively) were featured.

In many episodes, Doug pretends to be one of his personal superheroes to solve the problem; the methods the hero uses are adapted to fit a real-life situation. For example, one episode has the vice principal Mr. Bone refusing to have a popular rock band play at their school; he considers it heathen entertainment. Doug pretends to be Quailman dealing with the strict alien robots called Robo-Bones. When Quailman couldn't overpower the robots, they turned on him with horrible yodeling (Mr. Bone was part of a yodeling quartet). Quailman ended up saving the day by suggesting that they sing in key and form a band, which made everyone happy. Doug learned that, instead of fighting Mr. Bone, they should make a compromise. He suggested Mr. Bone's yodeling group to open for the rock band, figuring that the student body suffering for five minutes was worth it.

Those imaginary characters were Homages to other heroes in pop culture. Smash Adams was James Bond, Race Canyon was Indiana Jones, Quailman had some resemblence to Superman. Skeeter once revealed his personal superhero as Silver Skeeter, obviously based on the Silver Surfer.

This show breaks away from the borderline-Negative Continuity of other Nickelodeon shows, even getting a Grand Finale when the network prized being able to not pay attention to airing order.

After its initial run, the show was bought and Retooled by Disney into Brand Spanking New Doug (Or Disney's Doug as it was later branded). It wound up changing a few things from the Nickelodeon version (the first episode even address this with the new changes of Doug's life) with many characters getting new looks and various supporting characters changing jobs and roles. Despite the changes, it was still a continuation of the original series, and ended up with a longer run than the original. Like the Nickelodeon version, it also concluded with a Grand Finale (something very few Disney cartoons have managed).

A theatrical film, accurately titled Doug's First Movie was released in 1999. It also got its own stage show in Disney-MGM Studios, Doug Live!, which ran from 1999-2001.

Nickelodeon's Doug is now in reruns on Teen Nick's "The 90s Are All That" block.

Not to be confused with the YouTube series Doug Derky, the protagonist of Drunkard's Walk, or any of these Real Life or fictional people named Doug (excepting Doug Funnie, of course).

Tropes used in Doug include:
Retrieved from "https://allthetropes.org/w/index.php?title=Doug&oldid=1925065"
Categories:
Cookies help us deliver our services. By using our services, you agree to our use of cookies.