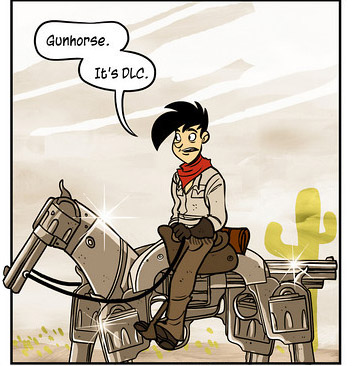 Downloadable content, or DLC, is video game data that is downloaded into the game that wasn't there originally. Examples include new levels, items, characters, and so forth. DLC was originally the exclusive domain of PC gaming, but every current game system (even the DSi, to a limited extent) now supports it. Downloadable content helps keep a game fresh and sometimes increases the replay value. It's generally small in size, so they are quick to download and install right away. Major exceptions to that are the Grand Theft Auto IV episodes (The Lost and Damned, and The Ballad of Gay Tony) which are much larger than just a single new level. Not too surprisingly, Rockstar made both episodes available for retail purchase in-stores, as a regular game disc.

Of course, DLC also has some controversy attached to it. Many a dedicated and knowledgeable gamer may crack the game to see what is stored in the disc, and they won't be too happy if they see that the DLC they got was already on the game to begin with, thus making the DLC pure Bribing Your Way to Victory. Another issue DLC brings up is pricing. It is subjective what content is worth paying for, but some gamers in general fear that game developers may use DLC as a way to milk more money out of their consumers by rushing the game (thus making it filled with bugs or missing content) and then charging people to get the rest of the good stuff. Also, DLC can often give a player a competitive advantage online, essentially forcing every player in the game to buy the DLC just to compete with other people who bought the DLC for exactly the same reason.

Of course, not all developers use DLC this way. Some do truly give brand new content without having to make people jump through hoops, and some even give these things away for no charge. At the same time though, some developers may force patches with new downloadable content and it may not sit well with people who don't want to upgrade their games from patching.

As with many things, many of the reasons and rationale on both sides can be ripe with knee jerk reactions. While it may be possible (and true) for a rare few developers to push out buggy games with less content in order to sell DLC, most are quite aware of one simple fact of video game life: Bad games don't sell enough to break even and make money (ie pay back the cost of development which will include paying off the publisher, advertising, retailers, etc). It's hard to sell DLC when the initial game does poorly. And in a somewhat hit-driven industry, putting out a bad game that doesn't make money can often mean the death sentence for all but the most well established developer. On the other hand, the rationale that game development has seen ever-inflating budgets may be true, the industry itself is at least partially to blame thanks having cultivated a bigger/better/newer mentality that continually tries to one-up itself without consideration for the logistics and reality that video games are one of the most expensive industries around. For instance, a typically AAA big budget title will likely have a budget around $50 million and take about 18 months to create. The typical time frame where a game will make the majority of its sales? Two weeks. That is well documented by industry organizations, whether for big hit or sleeper. Thus if a game doesn't make a splash in those first two weeks, it will likely never see the cost of development paid off in a reasonable amount of time to keep a studio alive. This puts intense pressure on studios to attract ever mercurial audiences to drop money on their title before the next big thing.

DLC has also been increasing the stakes in the Console Wars, as certain Multi Platform games on consoles only have DLC exclusively on one console, such examples including GTAIV's episodes (Which were originally 360 only), Batman: Arkham Asylum‍'‍s Joker Challenge Rooms (PS3 only), and Fallout 3‍'‍s DLC (originally 360/PC only, until the whole shebang was eventually released in a span of two weeks for the PS3). Some releases are merely timed, such as Fallout 3, but others aren't, such as Mirror's Edge. In some cases, DLC is free on some platforms but at a premium on others; Valve games like Team Fortress 2 and Left 4 Dead have free content updates on PC that must be bought on Xbox 360. This can come as a Regional Bonus of sorts, although extended to consoles; the long-awaited PS3 port of Mass Effect 2 contain 3 free DLC that Xbox and PC users have to pay for.

With the exception of the PC, where the vast majority of all DLC is user-made content and therefore free, DLC is a prime example of debateability. These complaints can become especially pointed when modding tools are omitted, access to mods from other platforms is denied, or online server browsers lock out mods. Mixes with New Media Are Evil when you encounter people who think DLC in general is pure evil and that all companies only care about ripping off its consumers for their games. Backlashes within the gaming community often occur (regardless of the content of the actual DLC), in the forms of Accentuate the Negative, Broken Base, Internet Backdraft, Unpleasable Fanbase, and many others are often seen when DLC is even discussed.

For products which are paid for and then downloaded in general see Digital Distribution.

Not to be confused with the Australian band Dead Letter Circus, or DLC.

Examples of Downloadable Content include:
Retrieved from "https://allthetropes.org/w/index.php?title=Downloadable_Content&oldid=1741153"
Categories: