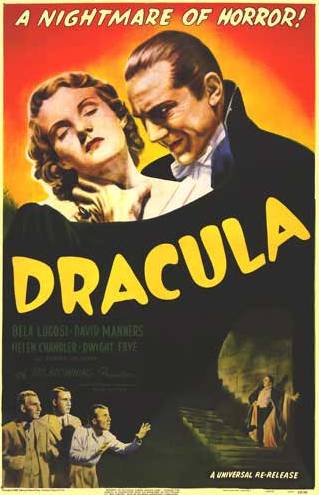 "To die, to be really dead, that must be glorious!"

Dracula is a Universal Horror film from 1931, which made Bela Lugosi famous as The Classical Movie Vampire. His portrayal of Dracula is the one most people think of when they hear the characters name (or even just the word "vampire"), even those that have never seen the movie.

Being bored with Transylvania, Count Dracula decides to move into London for some fresh blood. After making the proper arrangements with Renfield, Dracula makes him his thrall and travels to England by the sea, killing the crew of his ship in the process. When he finally arrives at London, he turns the Carfax Abbey (the property he bought with the help of Renfield) his base of operations. He then takes special interest on certain Mina Harker, who lives on the sanitarium premises owned by her father Dr. Seward at the next door. As victims turn up and Mina Harker starts to act weirdly, certain Professor Van Helsing comes to help...

The film was originally planned to be a high-budget adaptation of Bram Stoker's original novel, but due to The Great Depression, the film was instead adapted from the popular stage play at the time by Hamilton Deane and John L. Balderston.

In 1936, it was followed by a direct sequel entitled Dracula's Daughter.

Dracula was added to the National Film Registry in 2000.

For the 1958 Hammer Horror adaptation go to Horror of Dracula.

Tropes used in Dracula (1931 film) include:
Retrieved from "https://allthetropes.org/w/index.php?title=Dracula_(1931_film)&oldid=1922005"
Categories:
Cookies help us deliver our services. By using our services, you agree to our use of cookies.