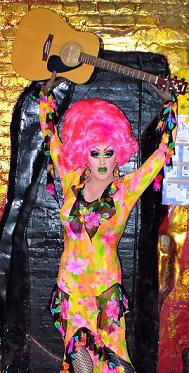 "Did you hear about the Scottish drag queen? He wore pants."
—Lynn Lavner, comedian

I'm into drag racing. I know it's really dangerous, but I love driving really fast with women's clothes on.
—George Smilovici, "I'm Tuff"

Unlike transvestites, drag queens wear women's clothing only on special occasions. They are usually gay men who occasionally like to get that little bit more flamboyant by dressing up as a tornado that's just rushed through a mountain of candyfloss and glitter. They can get dolled up for a variety of reasons; perhaps they are paid entertainers and the drag is part of their act, perhaps they consider it an art form; or perhaps they just enjoy it. It differs from person to person.

Drag queens on TV are sometimes used for the old "straight man comes on to a girl in a bar... but she's not a girl!" joke. A popular variation on this will have the straight man remain completely oblivious to the fact that he's copping off with a man until the last possible moment. However, this joke usually uses Transsexuals instead, since they tend to dress up a little more plausibly than drag queens, who are usually clad in a stylized and outlandish parody of feminine clothing. It's also common for women to comment on how much they wish they had the queen's legs.

Drag queens on TV are usually sharp-tongued and witty, matching the stage personas of real-life professional stage performers. They may provide the main character with world-weary advice or help put forward (ironically) a "just be yourself" Aesop.

There are many heterosexual men who "drag up" to play characters. One such man is Barry Humphries, who appears as TV presenter Dame Edna Everage in both the United Kingdom and Australia. They are generally included in the drag queen category as well, especially if the female characters are a predominant part of their act.

The Distaff (ahem) Counterpart is drag kings—women dressed as men performing masculinity with levels of exaggeration similar to drag queens. They're not as well-known in mainstream culture despite being popular with the lesbian crowd. A few drag performers are Transsexualism, but one doesn't indicate the other. Those who are tend to leave the drag world behind after transitioning, if they're too convincing as their desired gender.

Examples of Drag Queen include: