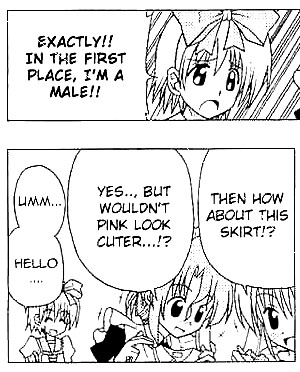 Nagi and Maria discover the joys of playing dressup.

Whenever a guy happens to need girls' clothes for some reason, the girls around him suddenly get a Psychotic Smirk... oh boy. This activity is always portrayed as more fun for the girls than for the boy; girls in fiction just relish the opportunity to play with the victim like a doll and often revel in his discomfort. In most cases, this is all Played for Laughs, sometimes accompanied by a Gilligan Cut.

Sometimes, the guy being dressed up may have feminine attributes and other characters mistake them for being a pretty girl, possibly falling in Love At First Sight. If this happens, the guy will play along because he's too embarrassed to reveal his true identity.

This is often the traditional punishment for a teenage boy caught spying on a girls having a Slumber Party.

Subtrope of Disguised in Drag. Often combined with Instant Cosplay Surprise. Contrast Wholesome Crossdresser, a guy who's totally into doing this thing and probably doesn't need a girl's input. May overlap with Becoming the Costume.

Examples of Dragged Into Drag include:

Retrieved from "https://allthetropes.org/w/index.php?title=Dragged_Into_Drag&oldid=1944774"
Categories:
Cookies help us deliver our services. By using our services, you agree to our use of cookies.