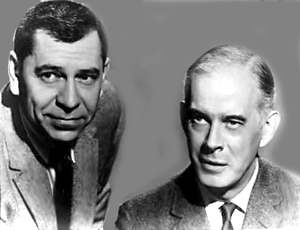 "Their job... to enforce the laws, and preserve the safety of decent citizens."

Archetype of the Police Procedural, Dragnet followed the exploits of Sgt. Joe Friday (badge number 714) and his partner, Bill Gannon, as they investigated crime in Los Angeles.

Dragnet was the brainchild of its star and writer, Jack Webb, who brought to the screen a level of realism in the Police Procedural that had never been seen before and has only rarely been seen since. This was accomplished via contacts he had in the LAPD, who provided him with both anonymized versions of actual cases and details on contemporary police procedure.

Unqualified, the title Dragnet usually refers to an entire franchise of series which ran intermittently from 1949 to 1971:

Officer Bill Gannon, played in the revival series by Harry Morgan (as Henry Morgan), was actually a Suspiciously Similar Substitute, the last and best known of at least four partners Friday had in the course of the show. Barton Yarborough portrayed Friday's original partner, Sgt. Ben Romero, from the start of the radio show until his death in December 1951, just three episodes into the first TV version. He was briefly succeeded by Barney Phillips as Detective Sgt. Ed Jacobs, then by Ben Alexander as Officer Frank Smith from late 1952 to the end of the TV show's original run in 1959.

Unlike just about every other police show in history, the focus of Dragnet was not always on homicide: Friday and his partners rotated through the various departments from week to week, allowing them to solve not only murders, but also fraud, arson, and drug-smuggling.

Each episode ended with a mugshot of the perp as a Narrator related the results of their trial.

The show spawned a number of Catch Phrases, such as "The story you are about to hear is true"; "This is the city: Los Angeles, California"; and "My name's Friday. I'm a cop" (eventually, "My name is Friday; I carry a badge"). But the most famous phrase identified with the show - "Just the facts, Ma'am" - is actually a Beam Me Up, Scotty born from a series of Dragnet parodies created by Stan Freberg.

Dragnet also spawned a 1987 feature film, a combination homage and Affectionate Parody featuring Dan Aykroyd as a new Joe Friday, the nephew of Webb's character, and Tom Hanks as his partner. Harry Morgan reprised his role as Bill Gannon, now a captain. The film follows Friday as he continues his uncle's legacy of straight-laced crime-fighting, teaming with undercover detective Pep Streebek. The duo are assigned to investigate a series of bizarre and (seemingly) unrelated robberies and vandalisms, eventually uncovering a dastardly plot by an underground pagan group of undermine all authority in Los Angeles.

Two years later, another Dragnet (sometimes The New Dragnet) revival (In Name Only) aired in syndication. It featured an LAPD cop named Vic Daniels, and the only connection to its namesake was the Framing Device of the opening narration.

Dick Wolf attempted another Revival in 2003 with a series which was eventually retitled LA Dragnet, staring Ed O'Neil as Joe Friday. The show failed to distinguish itself from the dozens of other cop shows on at the time (CSI, Law and Order, NYPD Blue, etc.), and lasted only a season and a half. This may have been largely due to a lot of people being unable to get past the idea of "Al Bundy as a cop," despite the fact that O'Neil, a highly accomplished actor, created a wonderfully cynical, seen-it-all characterization that was both distinct from Jack Webb's portrayal and nothing like his Married... with Children role.

Mathnet, a math-themed parody of Dragnet, was the central sketch of the educational program Square One TV.

The four note Sting used as a Theme Tune and at commercial breaks is one of the most recognizable musical cues in the history of television and radio. Even today, the sting signifies the forces of law and order as a calm, methodical and relentless force hounding criminals. Listen here (.wav file).

Joe Friday's badge, number 714, which appears during the opening titles, is a real LAPD badge, not a reproduction. Joe Friday is the only fictional character ever to be issued an official badge number by a US police department.

When Jack Webb died in 1982 he was given full police honors at his funeral although he had never actually served in the force. The chief of police also announced that badge number 714 would be retired and would never be assigned to anyone else.

Tropes used in Dragnet include:

Retrieved from "https://allthetropes.org/w/index.php?title=Dragnet&oldid=1831807"
Categories:
Cookies help us deliver our services. By using our services, you agree to our use of cookies.