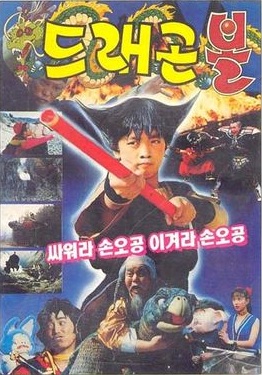 Goku is a kid, Master Roshi has a turtle and Yamcha has Puar... now this one really LOOKS like Dragon Ball!

It was released on 1990 by (Normally) animation studio Dai Won; and for those who have seen it, it's full of Narm Charm and B-movies charm.

In comparison with the other two Dragon Ball films, American Dragonball Evolution and Chinese Dragon Ball: The Magic Begins, this movie is by far the most faithful to Akira Toriyama's story, and the one that received the highest ratings in the Movie Database (5.0, against 3.1 of DBE and 3.8 of DBTMB).

Also, since this movie is impossible to get, you might have to resort to piracy to see it. It can easily found on a Google or YouTube search.

Tropes used in Dragon Ball: Fight for Victory, Son Goku! include:
Retrieved from "https://allthetropes.org/w/index.php?title=Dragon_Ball:_Fight_for_Victory,_Son_Goku!&oldid=1829458"
Categories:
Cookies help us deliver our services. By using our services, you agree to our use of cookies.