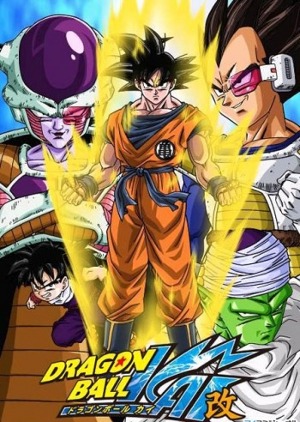 They're Back. Now with 86% less Arc Fatigue!

Dragon Ball Kai debuted on April, 2009 in time for the 20th anniversary of Dragon Ball Z.

In a nutshell, Kai is a Recut of Dragon Ball Z for the 21st Century. Yes, it tells the same-old story of how Goku learned he was a Saiyan, his battle with Vegeta and Nappa and other villains. What else is new? Plenty!

The animation has been updated, the talk breaks are few and far between, and there is next-to-no Filler or Padding. End result is a sleeker, faster, more action-packed show than the original series. The original Dragon Ball Z had 194 episodes up to the end of the Cell arc, while Kai has only 98; this means a ratio of roughly 1 Kai episode for every 2 Z episodes.

The vast majority of the original voice actors in both Japanese and English were recruited to reprise their roles. Masako Nozawa returns as Goku's Japanese voice, as well as Sean Schemmel for the English dub. Christopher Sabat again directs the English dub by FUNimation.

The English dub of Kai is noted to be considerably more accurate than the Z dub, without any of the character rewrites, replacement scores, or massive dialogue changes (though there are a few dialogue alterations in the CW4Kids version of Kai) that the Z dub was most notable for.

A character sheet can be found over here.

How many Saiyans does it take to screw in a lightbulb? Just one. And nowadays, they are actually doing it rather... efficiently.