Everything About Fiction You Never Wanted to Know.
(Redirected from Dragon Crisis)
Jump to navigation Jump to search 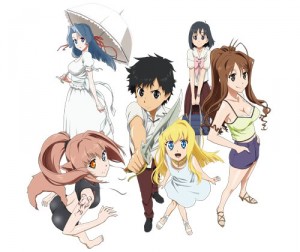 Can you guess which ones are the dragons?

Ryuuji Kisaragi is an Ordinary High School Student, living a peaceful life. Until his second cousin Eriko comes home from America, forcibly enlisting him in Seven Tails, her (unapproved) organization dedicated to hunting down Lost Precious, powerful artifacts from around the world. One of these artifacts is being traded that night, and she wants his help.

After seizing the box with the artifact, the box opens to reveal a young girl (later named Rose) who's both attached to Ryuuji and able to throw fire. She is a dragon, and her very presence sets off a chain of events that will decide both Ryuuji and Rose's future.

Based on a series of Light Novels, Dragon Crisis! was adapted into an anime in the winter of 2010/11.

Tropes used in Dragon Crisis! include:
Retrieved from "https://allthetropes.org/w/index.php?title=Dragon_Crisis!&oldid=1716415"
Categories: