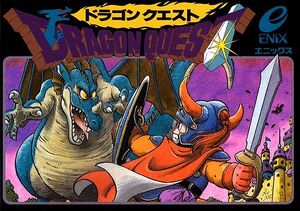 The first in the groundbreaking Dragon Quest series, Dragon Quest I (called Dragon Warrior in the US when it was first brought over) is the story of the descendant of Loto (or Erdrick, in the original English rerelease), who has been summoned by the king of Alefgard to rescue his daughter and defeat the Dragonlord/Dracolord, who is threatening the kingdom.

Yeah, that's pretty much it. It barely rises above the level of Excuse Plot, but considering it was essentially the first to even try to on a console (it was originally made in 1986), it was incredibly groundbreaking at the time. Essentially the first console RPG. Especially as Nintendo gave away copies to people who made subscriptions to Nintendo Power. The console RPG craze began because Nintendo had so little faith in the genre's appeal to Western audiences that they were giving away cartridges to bolster magazine sales. And it worked - this was pretty much the first RPG Westerners ever played, and it seems a lot of people liked it.

Innkeeper: Good morning. You were up late!