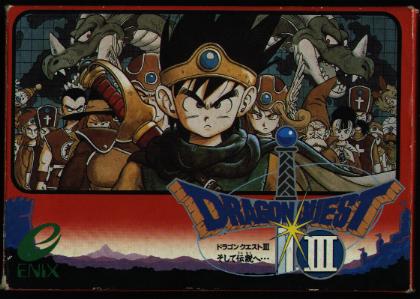 Dragon Quest III rounds out the original Dragon Quest trilogy by casting the player as the son/daughter of the hero Ortega, who... didn't quite finish his grand journey to slay the evil Baramos. So, now that you're sixteen, everyone expects you to pick up where he left off and get to villain slaying already! Thankfully, you're not expected to do this alone; the local tavern serves as an excellent adventurer's hub, where you can recruit a number of loyal party members, including:

Dragon Quest III was such an outstanding success in Japan-so much so that people were actually being mugged on the street for their copy, something that just did not happen with video games back then. The insane amount of hype to led to these events wasn't totally unfounded though: while Dragon Quest II had introduced the concept of multiple-PC parties to most players at the time, it was restrictive to the point that some people complained directly to Enix itself. In response to these out cries, Dragon Quest III introduced the job system that would appear in various Dragon Quest games, allowing you to customize your party to some degree. You could also pick everyone's gender, meaning that if you wanted a team of Action Girls, nothing was stopping you... and female characters got to enjoy a few benefits barred to their male counterparts.

Tropes used in Dragon Quest III include:
Retrieved from "https://allthetropes.org/w/index.php?title=Dragon_Quest_III&oldid=1955117"
Categories:
Cookies help us deliver our services. By using our services, you agree to our use of cookies.