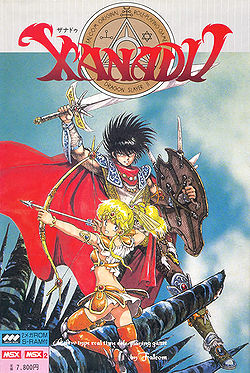 Several years before the dawn of the cult hit Ys series, Nihon Falcom created what some continue to consider their signature spotlight title: Dragon Slayer II: Xanadu. Alongside with being a best seller back in 1985, this Action RPG managed to set the foundation for Falcom's future titles, up to including the aforementioned Ys series.

You play as a nameless protagonist, who after speaking with the king and visiting seven stat trainers, must explore an underground complex filled with monsters, treasures, and puzzles, with each level getting more challenging as you go along.

Despite being a sequel to the first Dragon Slayer game, it spawned a series of its own, including the well-known NES Spin-Off Faxanadu.