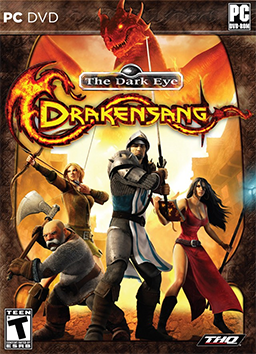 Sean Connery is about to chop your head off?

Drakensang is an RPG developed by Radon Labs and was released in 2008 in Germany and 2009 in the USA.

The game itself has an old school approach to RPGs. Gameplay is similar to the Neverwinter Nights series and Baldur's Gate.

The series is set in the universe of the German Tabletop RPG called The Dark Eye, or "Das Schwarze Auge" in the original German.

The first game takes place aroud the city of Ferdok, where you travel after your old friend/mentor Ardo of Boarstock sends you a letter asking for your help. However, after your arrival you are informed that Ardo was seemingly the latest victim of a serial killer. The following events in your search for the identity of the murderer leads you in being The Chosen One in the search for an ancient artifact.

An addon Drakensang 2 - Phileasson's Secret is released and a future Drakensang 3 was semi-confirmed by one of the developers.

An MMO (which may or may not be Drakensang 3) called Drakensang Online was released and launched after several months of beta testing.

A Character page has been made, but it needs work badly.

Tropes used in Drakensang include:

Retrieved from "https://allthetropes.org/w/index.php?title=Drakensang&oldid=1509711"
Categories:
Cookies help us deliver our services. By using our services, you agree to our use of cookies.