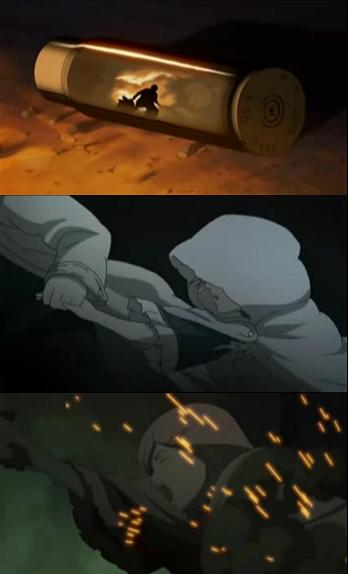 Frank Pollard wakes up in an alley at night, filled with confusion and fear. He knows nothing but his name, and that he must escape fast, or else he will be killed. Pursued by a mysterious assailant, Frank barely escapes with his life.
—Dean Koontz' The Bad Place, Wikipedia

It's dark, and possibly rainy. The faint streetlights get reflected on the small puddles on the street. A shadow appears on the brick wall, and a foot disturbs the reflections: Someone's running, possibly wounded but always unarmed, and he's desperate to find somewhere to hide. The same puddle is stepped on by two or more armed agents, or perhaps an unseen terror. A few moments later, the scene comes to a conclusion, and the Opening Credits roll.

The Dramatic Chase Opening is more than just a Chase Scene: It's specifically Played for Drama, and designed to introduce the good guy and/or the bad guy(s). The circumstances strongly favor the pursuers: The pursued person has no vehicle; the illumination is poor; the weather can be foggy, snowy or raining. If the chase is in the streets, it's often played in a ghetto filled with dark alleys (bonus points if the chase continues in the sewers). The person being chased could be a civilian with an average or bad physical condition. Since it's the beginning of the movie/series and Anyone Can Die, a Broken Heel has a stronger effect on the viewer. Visual effects can include Chiaroscuro to evoke a Film Noir look and feel.

To take the drama Up to Eleven, the victim often looks vulnerable: Scared to death; always underpowered and outnumbered; little or no experience in hand-to-hand combat, or otherwise at great disadvantage (i.e. wounded or with just a few bullets left); and very probably the last survivor of an evil experiment Tested on Humans, an ethnic cleansing, or the witness to a crime. Frequently it's a child, a Damsel in Distress, or someone carrying a young child. In a school setting, expect the Woobie to be chased by a Gang of Bullies. It could also be a common burglar fleeing justice or something worse.

The Dramatic Chase Opening doesn't necessarily need to the the first scene in a movie or series. It can be delayed a couple of scenes so we get a brief intro on the victim or hero.

Possible scene endings include, but are not limited to:

(Note that this trope does not apply when the chase is a vehicle pursuit, i.e. the Star Wars: A New Hope beginning pursuit. That belongs to a different category.)

Subtrope of Action Prologue (itself a subtrope of Cold Open) and Chase Scene. Can lead into Pursued Protagonist (a Chase Scene where the protagonist gives an item or message to the real Hero), but not always. Can overlap with Broken Heel and Blind Alley. Sometimes ends with a Thwarted Escape.

Examples of Dramatic Chase Opening include: