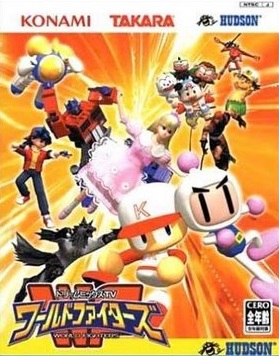 Most likely, the only Crossover where EVERY character is The Unexpected

DreamMix TV World Fighters is, in very few words, what happened when Konami, Hudson Soft, and Takara decided to make a Mascot Fighter game together. Including a very particular roster characters that range from Simon Belmont to Bomberman to OptimusPrime, one can't help to feel that this game is a little bit... weird.

The story is simple yet convincing: There is a TvChannel (called DreamMix TV) that wants to get bigger ratings, so they invite different "celebrities" to participate and compete with each other. Enter the different characters from different companies.

Released in 2003 for the Game Cube and PlayStation 2, this game never left Japan, so there is little chance for non-Japanese gamers to play it. In case you are want to see a little demo of the game, go here.