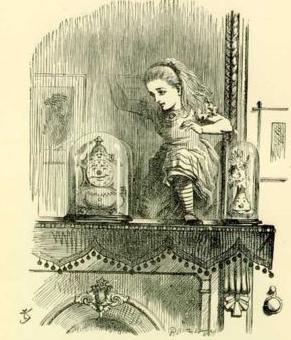 A Magical Land or Another Dimension comprising the collective dreams of humanity. Can be a collective dream, or the dream of a specific person. Generally surreal, nonsensical, and psychologically symbolic. Alternatively, just adorable randomness. Usually divided into two halves or factions — nightmares and good dreams.

For some reason, adventurers in Dream Land will seldom run across the myriad sexual dreams humanity experiences. Odd that, as you'd think there'd be a huge Red Light District.

May provide a setting for Talking in Your Dreams.

In medieval Europe it was commonplace for a writer to situate a story in Dream Land, as a way of apologizing for the fictional quality. As fiction became more respectable, the Dream Land became chiefly used for fantasy works, as it provided a reason why the Magical Land does not obey ordinary laws of nature. As fantasy became more respectable (for certain values of "respectable"), the Dream Land came to be used only in fictional settings relying on actual dreams. Still, this makes this Older Than Print.

Examples of Dream Land include:

Retrieved from "https://allthetropes.org/w/index.php?title=Dream_Land&oldid=1871423"
Categories:
Cookies help us deliver our services. By using our services, you agree to our use of cookies.