Dressing as the Enemy 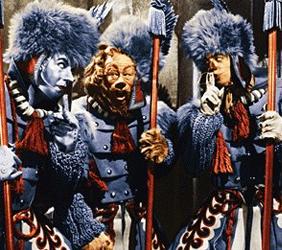 A most cunning disguise.

Most of the heroes are trapped in a cell, when the door opens and a guard wearing a face-concealing helmet enters.

They prepare for a fight. The guard takes off his/her helmet—and reveals that it's one of their allies.

In the real world, this is illegal for a military operation (under Article 39 of the 1977 First Geneva Protocol), but not when it comes to espionage (which makes it fair game to kill you anyway). Well, that is, unless you take off the uniform before you start firing, and a lot of other small things that our heroes nonetheless forget and our villains disregard anyway.

Note that the guard the hero knocks out is always wearing the right size uniform to fit them perfectly. (Except in subversions, in which case it fits them very poorly). This may or may not follow a Mugged for Disguise.

This occurs so often that Rule Number 1 on the Evil Overlord List is that the Legions of Doom should wear clear helmets. Another rule from that list calls for guards to wear tailored uniforms which will not fit any hero who attempts this trick.

May lead to Friend or Foe since you do, after all, look like the enemy.

See also The Mole, Trojan Prisoner, Hey, Wait!. On a regimental scale, this is a False-Flag Operation. When used with zombies, it's Pretend We're Dead. When the disguised arouses suspicion by constantly insisting on his alliance to the enemy, it's Most Definitely Not a Villain.

Examples of Dressing as the Enemy include:

Retrieved from "https://allthetropes.org/w/index.php?title=Dressing_as_the_Enemy&oldid=1929605"
Categories:
Cookies help us deliver our services. By using our services, you agree to our use of cookies.