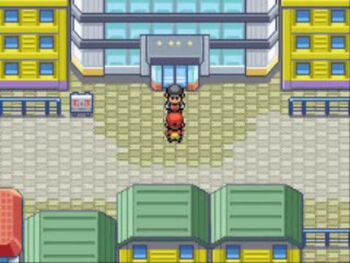 Just wait until he falls asleep...

When annoying NPCs stand in front of a door or passage and won't move.

This is usually accidental, and was far more common back in the days of tile-based maps, when a door would be one space wide and could be completely blocked if a mindless NPC happened to wander in front of it. Still occasionally shows up in modern games, if the Player Character can get "caught" on the character models of NPCs. Best case scenario when this happens is the NPC moves after a few seconds and you can move on as before, only slightly more annoyed with life. Worst case scenario; you may have to reset.

Either way, you have to wonder -- why can't you just push these people out of the way? Note that several 16-bit examples allowed you to; for example, Breath Of Fire 2 and Secret of Mana had NPCs move out of the way if you walked into them for a moment.

If it's intentional, placed there by the designers, you've got one of the more obvious forms of the Broken Bridge. A favorite tactic of the City Guards. See also Insurmountable Waist-Height Fence.

Examples of Dronejam include:

Retrieved from "https://allthetropes.org/w/index.php?title=Dronejam&oldid=1835526"
Categories:
Cookies help us deliver our services. By using our services, you agree to our use of cookies.