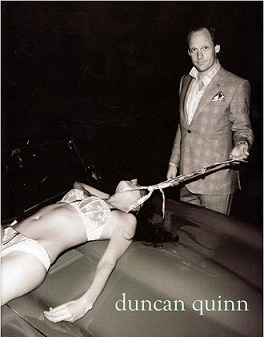 Nothing says men's formal wear like strangled women in their underwear!

There seems to be nothing more dramatic to crime stories than a dead, naked woman. Whether fully or partially nude, dead women are far more likely to be sexualized than males. Often this is justified by the murdered women being the victims of sexual crimes, while other times the purpose seems purely to titillate the audience. Feminist literature is stocked to bursting with analysis and condemnation of this trend.

Naked corpses might lead to I Love the Dead. Contrast Jacob Marley Apparel. See also Death by Sex, The Murder After, Disposable Sex Worker, and Interplay of Sex and Violence.

Not to be confused with the 1999 film Drop Dead Gorgeous.

Examples of Drop-Dead Gorgeous include:

Retrieved from "https://allthetropes.org/w/index.php?title=Drop-Dead_Gorgeous&oldid=1653021"
Categories:
Cookies help us deliver our services. By using our services, you agree to our use of cookies.