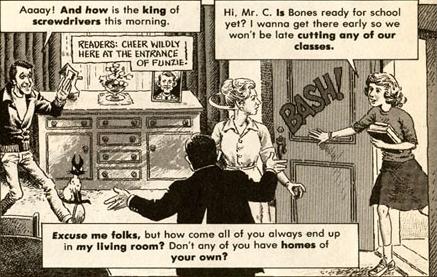 A neighbour who drops in on a regular basis and mooches around. He or she is often a friend of one of the household kids who is either very annoying or very cute. Because he or she is the neighbours' kid and we never meet his or her parents, he can exhibit all sorts of zany behaviour without the need for too much explanation.

In most cases, the main characters have given up on trying to get the drop-in characters to knock, a la Kramer from Seinfeld, or Lenny and Squiggy on Laverne and Shirley. Considering how much of a pain in the ass this sort of drop-in tends to be, the viewer is sure to wonder whether the host has ever thought to just lock the door, but don't expect that to be addressed in the show. It's exceptionally rare to even see a lampshade hung here.

For a different sort of "drop in character", see Face Heel Turn or Moral Event Horizon. For yet another different sort, see Suspiciously Similar Substitute.

Examples of Drop-In Character include:

Retrieved from "https://allthetropes.org/w/index.php?title=Drop-In_Character&oldid=1775765"
Categories:
Cookies help us deliver our services. By using our services, you agree to our use of cookies.