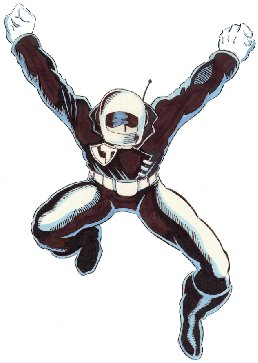 Serial Mega Crossover series more-or-less continuously written by Robert M. Schroeck since 1998. It is "serial" in two senses: first, in the more common usage, it has appeared in semi-regular installments for nearly twenty-five years (as of Spring 2022); second, unlike most Mega Crossovers which blend multiple sources into a single setting, Drunkard's Walk visits its different contributing series one after another, with little to no "bleed-through" between them.

At the center of the story is Douglas Q. Sangnoir, codenamed "Looney Toons", who would be called a superhero in any world but his own. On his native Earth, though, he is a metahuman -- and a paramilitary operative in Warriors Alpha, an organization of metahumans contracted by that Earth's version of the United Nation to act as its "super-police" force. A ten-year veteran of the Warriors and its Security Chief, with a rank equivalent to colonel, Doug Sangnoir is a professional soldier with a powerful but chaotic set of superpowers, an intimidating intellect, and a personal style strongly influenced by Warner Brothers cartoons. Ejected from his home universe by enemy action, he is on a quest to return there by traveling essentially at random through the multiverse (hence the name of the series). As might be expected, this means his trip goes neither quickly nor smoothly...

Although an honorable man who is loyal to a fault and driven by his sense of duty to acts of occasionally insane bravery, Doug is no paragon -- despite his powerful intellect, he is prone to leaping to conclusions and acting foolishly, and he is a bigot on two fronts: he initially dismisses most Muggles as fragile ephemeral creatures who need protecting but are otherwise beneath his notice; and he hates most gods and godlike beings with a near-homicidal (deicidal?) passion. Both these attitudes get him in trouble at one point or another during his journeys...

When it is complete, the Drunkard's Walk will be composed of 14 main parts, called "Steps". Of these Steps, two are complete (as of early 2022), four chapters of a third have been released, and the first four chapters of a fourth and the first chapter of a fifth are available. In addition to the these major stories, the author has been writing and releasing short pieces he calls "Steplets". He also writes (and encourages readers to write, as well) short-short vignettes he calls "nanoSteps".

The home of Drunkard's Walk can be found here.

Drunkard's Walk is part of a larger metafictional continuum mapped out here.

Drunkard's Walk is in fact part of a much larger metafictional continuum mapped out in this image.

Tropes used in Drunkard's Walk include:

Doug himself routinely advises those he mentors "never leave an enemy alive to attack you again".

Retrieved from "https://allthetropes.org/w/index.php?title=Drunkard%27s_Walk&oldid=1963991"
Categories:
Cookies help us deliver our services. By using our services, you agree to our use of cookies.