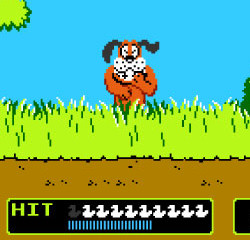 Nobody cares about the ducks, but this laughing bastard is the one everyone knows from this game. Can we butcher him, please?

Duck Hunt is a fairly simple game. You have two options. One was simply going to the target range and shooting at clay pigeons to improve your aim. You could shoot at one or two at a time, and could keep going until you didn't hit as many as the round target required. Almost nobody remembers, or cares, about this part.

No, the main attraction, as you can imagine, is hunting ducks with your trusty hunting dog. Depending on the mode, he would flush out one or two ducks at a time, and you had three shots to nail the ducks before they got away. Later rounds introduced faster ducks that tried to escape more quickly. Until, of course, they wouldn't even appear on the screen, resulting in a Kill Screen.

This game overall is widely remembered for a few reasons. One of the most prominent is that it was a pack-in for most releases of the Nintendo Entertainment System, for even more versions than Super Mario Bros.. Eventually the two were combined into one cartridge to be the pack-in game. It was also remembered for the Zapper Light Gun that was required to play, being perhaps the most popular light gun created. It set the standard for making home light gun games for ages.

But most of all, it is remembered to this day because of that... fucking... dog... twitch, twitch. See, whenever you didn't manage to hit a duck, the dog would snigger at you in perhaps the most annoying fashion possible. And it would repeat said sniggering if you didn't take out enough ducks to advance to the next level. There's an entire generation of gamers who hate the Duck Hunt dog more than Scrappy-Doo. Seriously. Nearly every single reference or parody that's been done at some point includes shooting that damn dog. There were even quite a few people clamoring for the dog to appear in Super Smash Bros. Brawl before its roster was finalized, because it would give gamers the chance to finally beat the ever-living crap out of him. And hey, it's easy to imagine what his taunt would be. They finally got their wish in Super Smash Bros. 4, the dog, duck, and hunter are one character collectively known as Duck Hunt. And yes, his famous laugh is one of his taunts, as well as his intro cinematic and one of his victory screens.

Tropes used in Duck Hunt include:

Kill the Dog from Duck Hunt contains examples of: