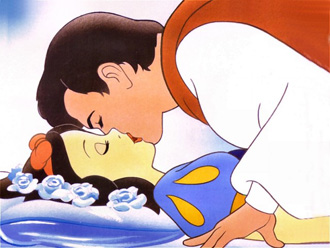 But really, can you blame him? She is the fairest one of all.

This is a kissing trope most common in anime and manga; the setting is a bedroom, or simply a place to rest, and two characters, one often harboring unrequited feelings for the other.

The premise is that one character is unconscious, whether previously knocked out, feverish, comatose, or simply asleep; the other falls for 'their attractive sleeping face', and unable to resist, leans in to lock lips...

This situation will progress differently depending on the genre of the series, and the status of the characters. They may or may not pull it off, resulting in an Indirect Kiss, First Kiss, etc., or they may be interrupted by another character bursting in, usually including a guilty start.

It is not unknown for the other person to be feigning sleep when they realize that the character might kiss them.

Frequently used in Shojo series and Shonen love comedies, where the girl's vulnerability seems irresistible to the male character. This trope is fairly gender-equitable, though, as girls are also prone to this urge. In Real Life, it is known as somnophilia.

Sister Trope to Converse with the Unconscious.

Contrast Kiss of Life, which is often mistaken for this.

Examples of Dude, She's Like, in a Coma include:

Retrieved from "https://allthetropes.org/w/index.php?title=Dude,_She%27s_Like,_in_a_Coma&oldid=1945903"
Categories:
Cookies help us deliver our services. By using our services, you agree to our use of cookies.