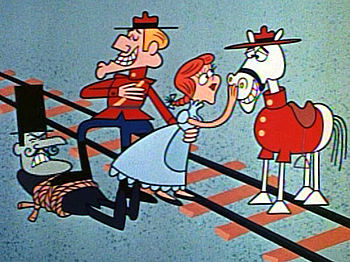 Originally a supporting character on Rocky and Bullwinkle, Dudley Do-Right was an endearingly (to the audience, at least) incompetent officer of the Royal Canadian Mounted Police, spoofing silent-movie melodramas. Apparently the only officer in his regiment, Dudley took orders from Inspector Ray Fenwick while protecting the inspector's daughter, Nell, as well as the rest of Canada, from the schemes of the wicked Snidely Whiplash.

In the late 1960s, Dudley headlined The Dudley Do-Right Show, his own half-hour Animated Anthology series which also included cartoons from Total Television, the creators of King Leonardo and His Short Subjects (TTV and Jay Ward both used the services of Gamma Productions).

The Other Wiki mentions a 1998 video game, but provides no details.

Narrator: In the dim light that dim-wit threw in the fireplace not firewood but firearms!